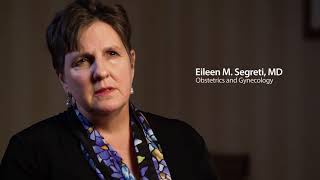 Dr. Segreti received her medical degree from Duke University of Medicine followed by her internship and residency at Northwestern University in Chicago and

Cancer Center. Board-certified by the American Board

of Obstetrics and Gynecology in Gynecologic Oncology, Dr. Segreti is a frequent presenter on ovarian, cervical, and other gynecologic cancers.

Dr. Segreti was named one of Pittsburgh Magazine's "Best Doctors" in 2019.

* This search is powered by PubMed, a service of the U.S. National Library of Medicine. PubMed is a third-party website with no affiliation with Allegheny Health Network. Please note that modifying search criteria and/or author’s name may enhance search results.

Physician Detail Average Ratings
Likelihood of recommending this care provider
4.9
Concern shown for your questions or worries
4.8
Explanations about your problem or condition
4.9
Discussion of proposed treatments (options, risks, benefits, etc.)
4.8
Efforts to include you in decisions about your care
4.8
Unlike websites where anyone can post doctor reviews, only actual patients can provide information by completing the survey sent to them. Learn more.
Patient Comments
Excellent doctor. Compassionate.
I learned very much from Dr Segreti about my position!
Very detailed
Dr. Segreti is always great; very thorough, listens to her patients and shows concern for their well being.
Very good experience with Dr. Segreti. I have complete faith in her and her skills & knowledge.
Dr Segreti is a lovely person. She is friendly and approachable and made my visit as pleasant as it could be.
Dr. Segreti is an amazing person & doctor! She is so caring & I am so grateful to her. I have the utmost respect for her.
Dr. Segreti is an excellent and compassionate provider. She spends time with her patients and explains all her treatment plans in detail. She is the perfect provider for those that need to see her. Not to mention her skills are second to none
Dr. Segreti is an exceptional care partner. I am continually impressed with the time she spends with me and the care and follow-up she provides. While my situation may not be as serious as the many patients sitting in her waiting room, I know if and when it comes to that, she cares for each of us at the highest level required.
Dr Segretti is wonderful
Dr. Segretti and [...] are always helpful and to the point with answers to my questions and concerns.
You are lucky to have Dr Segretti. She is a wonderful doctor
Dr. Segreti is to the point but in a kind and warm way! I have been a patient for 3 years and have always felt comfortable and valued!
Dr Segreti is wonderfully caring and kind.
Dr. Segreti is the best GYN or for that matter, doctor I have ever had in my [...] yrs. You always feel she cares and is there for you. I feel lucky to be under her care.
Best in her field!
Dr. Eileen Segreti very good and knowledgeable GYN Oncol. physician. I highly recommend her to all.
love dr. segretti.
Dr. Segreti is very caring. she listens to you and also explains anything you like in more detail.
Dr.Sergetti, I find her to be Great! She's compassionate but very directed ...just as I need.
I always have great appointments with dr Segreti!
the doctor goes above and beyond what is expected
always kind and supportive!
Dr. Segreti and her staff were very professional and caring in providing treatment for me.
Good! She is EXCELLENT and very caring.
I just loved her right away and trusted her with my life.
Very compassionate, caring, and professional. Just wonderful, doctor and her physician's assistant.

Take our Doctor Match Quiz
Get matched to a doctor who suits your personal style.
Get Started